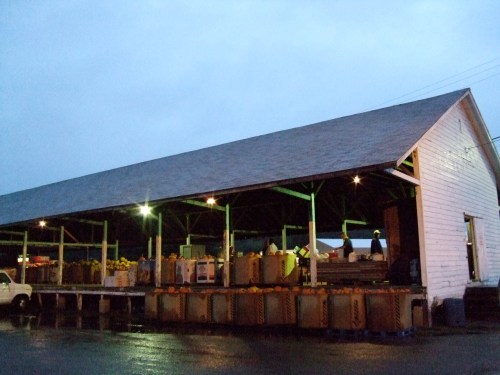 This morning, my friend Geoff sent me a link to a new article he wrote about the Tri-County Cooperative Produce Auction, which we visited in September.

It’s great news:  in addition to doing the weekly auction and direct sales, the co-op is adding a CSA!  They don’t necessarily call it that, but that’s what it is.  Local families pay $25 a week for 20 weeks to get a crate full of whatever veggies and fruits are moving through the auctionhouse – tomatoes, green beans, peaches, corn, peppers, and so on.

North Hanover Mayor James Durr has sold produce from his 1,200-acre farm at Tri-County for 13 years.

”The advantages to the auction are fairly apparent,” he said. “If the program is successful and does distribute some volume of produce to consumers, it’s another customer to growers that make up the co-op, and additional customers are always a great thing.”

Buyers, he said, will benefit from the “variety of locally grown fresh produce” they will receive.

”Jim Durr is a very important grower of ours,” she said. “He brings in both fresh produce as well as magnificent cut flowers.”

Ms. Ballister-Howells said this new method of delivery will be more accessible to locals.

”The average family has no use for an entire crate’s worth of lettuce,” she said. “We never had a way for people to leave with just two heads of lettuce before. But if you participate in the CSA, you get a full crate, but it will have a diverse number of things in it.”

She touted the advantages of buying food that will be eaten just a stone’s throw from where it was grown.

Ms. Ballister-Howells said she hopes the current economic crisis will help fuel a resurgence for the co-op, which has experienced some decline over the years. Thus far the year is off to a promising start, as sales have exceeded the start of last year’s season, she said.

This is fantastic for a couple of reasons:

1. Local families have another source of getting delicious, local, healthy fruits and vegetables.  When Geoff and I went to the auction in September, the food was being sold and auctioned in larger quantities than we could really use – like a 20lb box of Hungarian wax peppers, or 20 pounds of ripe tomatoes.  I was too nervous to bid, worried I’d somehow end up with boxes and boxes of produce instead of the small quantity I wanted.  Breaking up those boxes of one type of vegetable or fruit into a crate with lots of fruits and vegetables makes it much more accessible for a consumer, as opposed to someone running a restaurant or farm stand who can use 100 pounds of tomatoes.  And $25 a week for a huge box of produce is a great deal!  Its much, much less than you’d spend at a grocery store.

2.  More customers for the Co-op auction.  When we were there, a lot of the produce was fetching very very low bids – often lower than the farmers’ break-even point.  Though all the produce sold for the break-even point in the end, not a lot of it sold for more.  Bringing more buyers for the produce helps the farmers make enough money to stay in business, and continues to make it possible for the local area to get delicious, local, high-quality produce, rather than stuff picked before it was ripe, or trucked in from California.

This entry was posted in Uncategorized and tagged Co-op, farms, food sourcing, local food, New Jersey, what to do. Bookmark the permalink.