I don’t know this because I am a font of horticultural knowledge. Rather, I know this because on my way to the library Monday I ran into a very kind fellow called Jeff who was out harvesting mulberries from a tree near my apartment. We got to chatting about food and the co-op and free markets, as well as the intricacies of mulberries. Intrigued and delighted, I convinced Jeff to let me tag along on his next urban foraging expedition.

Apparently, mulberry season is in full swing here in New York city, and will be for about another two weeks. Mulberries are like a sweeter, more oblong, more intense blackberry, with fewer pits (but an edible stem!) and a slight hint of blueberry flavor. In other words, completely delicious. The easy way to identify a mulberry tree is to look for the mess underneath it, along with the sweetish odor of crushed and rotting fruit. Most mulberries are ripe when they’re black (they gradually change from white to red to purple to black) and release easily from the tree.  There are quite a few mulberry trees in New York city, mostly planted decades ago.

This is particularly exciting as fresh ripe raspberries are very difficult to come by- I’ve never seen them for sale. This is probably due to the extreme fragility of the fruit; they are far more delicate than the blackberry or raspberry. Consequently they aren’t often used for cooking, though they are delicious eaten out of hand. Joy of Cooking, whose 1973 edition discusses fruits like the litchi and the even more exotic akee, acerola and mangosteen, has only the following to say about mulberries:

The mulberry, despite its close resemblance to members of the Rubus family, is not in the least related. As everyone knows, the leaves of the white-fruited tree make up the traditional diet of the silkworm. Purple-fruited mulberry trees are best suited, in our opinion, for varying the diets – and flexing the muscles – of marauding schoolboys.

Despite the disapproval of Joy of Cooking, Jeff and I set out to harvest mulberries this Wednesday. As we got started, we attracted a lot of attention, and many people stopped by to chat and enjoy the fruit themselves. 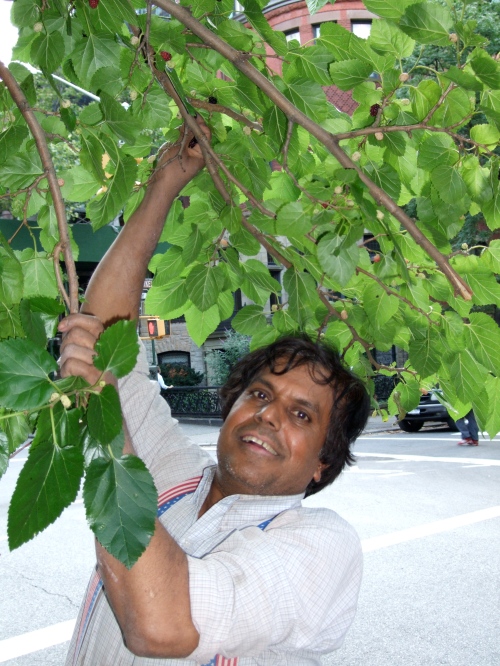 This last fellow is Muhammed, a charming builder who saw us harvesting, ate his fill, and lent us a very capable hand. Below is our very high-tech harvesting technique:

After about an hour of thwacking and catching, we had amassed quite the tidy pile of mulberries, from just the one tree. I’m excited about the haul; in addition to just eating them and putting them on ice cream, I’m going to attempt a mulberry compote.

If you spot a mulberry tree, do try some mulberries, as they are intensely delicious. But be careful, as they do stain terribly! 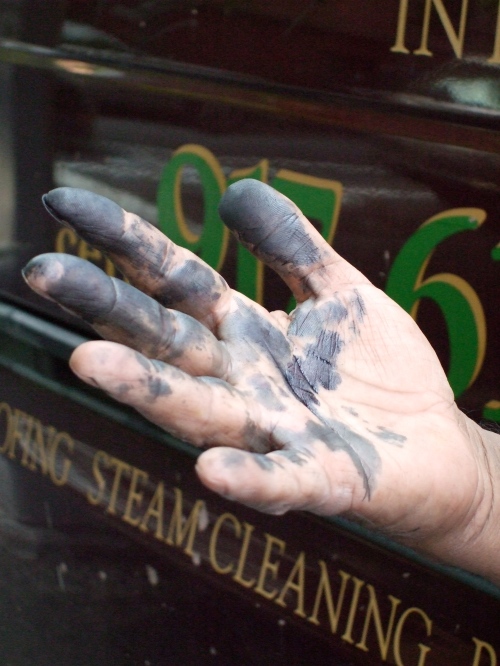 This entry was posted in Uncategorized and tagged community, food sourcing, fruit, harvest, local food, urban, what to do. Bookmark the permalink.